Case Study: Tailored treatment plan for brother and sister restores their hair and their confidence

Four years ago Sara’s* life had changed dramatically. She had been a 23 year old student and had emigrated to Australia to further her education…looking back, it had been a very stressful time and Sara was certain that this had been the catalyst to the current hair loss that she was experiencing today.

At her appointment with an Ashley and Martin hair loss specialist, she spoke of the stress that she had been under. She also spoke of her brother and told the consultant that genetics were probably also playing a part because he, too, was losing his hair.

Female hair loss (like all hair loss) can be a combination of genetics and/or external factors. The caring consultant explained to Sara that female pattern baldness (FPB) can be  more complicated than male pattern baldness (MPB) because more hormones can be associated with the problem. The treatment plans and medications used are largely dictated by the age of the patient and need to be specifically tailored to each client’s needs once blood tests have been taken (to rule out any other causes for the hair loss).

Sara was grateful for the professional advice that she had received. It was a lot to take in and she went away to think about her treatment options.

Four weeks later she went back to the clinic. After having her blood tests, Sara was diagnosed with Ludwig stage 2 hair loss – her scalp was starting to show through and her hair was thin and fragile – she was starting to lose some of her self-confidence.  She knew that the time to start the 12 month RealGROWTH® treatment plan was now.

Slowly but steadily her hair began to thicken and strengthen. She could feel the difference in density when she touched her hair and was very happy with the results she was seeing in the first few months. So much so that she referred her older brother to the clinic to get his own hair treatment program and now they are both looking forward to reversing the trend and getting back their hair, and their confidence. 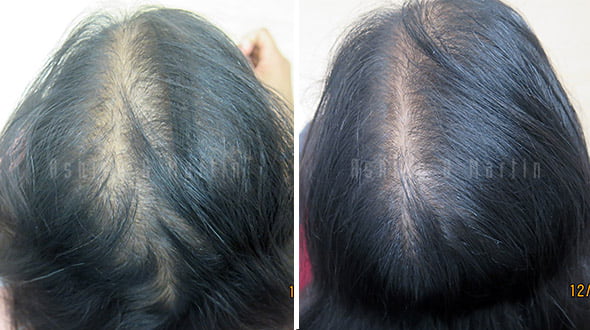 Case Study: Clients treatment plan restores her hair and her confidence at work Case Study: Stressed client turns to Ashley and Martin on hairdresser's recommendation. Case Study: RealGROWTH program works for client who thought she had left it too late