Case Study: RealGROWTH program works for client who thought she had left it too late

Often thought of as a ‘man’s problem’, it is not commonly known that over 40 percent of women, in their lifetimes, will experience a condition associated with hair loss.

This fact was known to Helen. She had been watching her hair get thinner and thinner for the past 5 years until, finally, her hairdresser referred her to the Ashley and Martin Hair loss website where Helen did some research. Encouraged by the medical approach and the success rate statistics, she filled out the online form and was invited to attend a free consultation with an Ashley and Martin hair loss specialist.

At the clinic Helen was greeted by a friendly team of professionals and felt relieved that she was able to discuss what was becoming an increasingly worrying problem with someone who understood how she felt.

She disclosed that she had been considering treatment for over three years, and had even tried over the counter medications to slow the shedding, but this approach hadn’t worked. Her consultant examined her scalp, noticing that her frontal hairline was receding and her hair loss was diffuse and uniformly sparse over her entire scalp. He diagnosed Helen’s hair loss at Ludwig level lll and, although Helen had no family history of baldness and no real stresses in her day to day life, she did have thyroid issues that were contributing to her hair fall.

Helen had become increasingly concerned about her appearance and, at 57 years old, she worried that she had left it too late to receive an effective treatment solution. Confident that it wasn’t too late, Helen’s consultant recommended Ashley and Martin’s twelve month RealGROWTH® program   –  a treatment plan that would halt the shedding and trigger the dormant hair follicles back into their growth phase, thereby regrowing Helen’s hair.

Commencing the multi-faceted treatment plan of oral and topical prescription medications, nutritional supplements, and in-home laser therapy treatment (half an hour, every two days); Helen diligently stuck to the program.  She also made sure that she used the recommended shampoos and conditioners which were free of sulphates, giving her new growth a healthy environment in which to thrive.

After just four months of treatment Helen could clearly see the difference. Her hair had noticeably increased in density, particularly around her frontal hair line and scalp parting. Her husband had commented on the changes, not just in her appearance but also in her confidence and Helen was very happy with the results so far.  Thankful to her hair-dresser for the initial referral, she was very keen to continue with the successful clinical approach that was giving her back her hair – and her self-assurance. 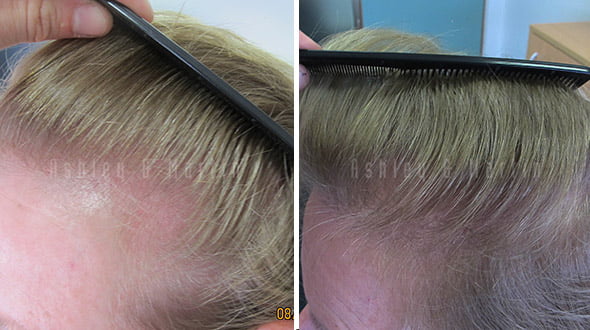