Before making the decision to attend a free consultation at Ashley and Martin, 26-year-old Tara* had spent a year in treatment with another hair loss clinic. Twelve months and zero results later, Tara decided to abandon the treatment that merely consisted of non-prescription topical ointments and head massages.

It had been three years since Tara had first been horrified to notice the gradual thinning that was taking place along her part line. Young, healthy and vibrant, Tara felt she was far too young to be losing her hair and far from being ready to give up, she booked her appointment at Ashley and Martin.

After assessing Tara’s hair loss, her consultant recommended a treatment that combined daily in-home laser therapy treatment, herbal supplements and specialised scalp hygiene products. As all of this would take place at home, an Ashley and Martin Review appointment would be conducted every four months to monitor her progress. It was expected that with time, regular treatment and patience, Tara would achieve the hair regrowth she had been looking for.

At Tara’s first Review, she was convinced no changes had taken place at all. Her consultant compared photos taken at the initial appointment with ones taken that day. While these photos showed minimal improvement to date, the condition of Tara’s hair had stopped degrading and fine, new hairs could be seen to be growing in formerly dormant follicles. Her consultant encouraged her to keep up the treatment. It was early days still and now the condition had stabilised, the exciting new growth could begin.

At the eight month review appointment it was clear that an amazing leap forward had been made. Photos from that day were compared to the initial and four month photos to see each stage alongside each other. Thrilled by the progress made so far, Tara and her consultant looked forward to seeing what would be achieved with another four months of treatment. 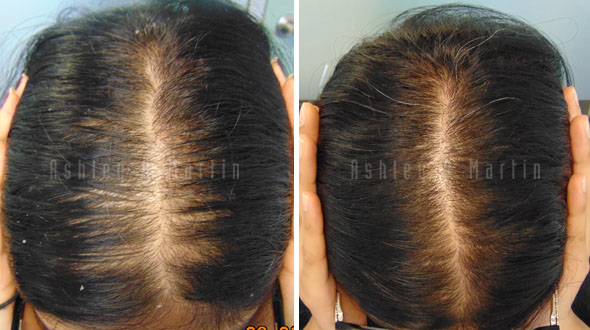 Case Study: Stressed client turns to Ashley and Martin on hairdresser's recommendation. Case Study: Tailored treatment plan for brother and sister restores their hair and their confidence Case Study: RealGROWTH program works for client who thought she had left it too late