For over a decade Pauline* had watched her hair slowly thin. It wasn’t that she had not tried to do anything about it, it was just that nothing had worked to date. Consulting a dermatologist had changed nothing, as had twice daily topical treatments. After using the topical remedy with no success for quite some time, Pauline simply stopped using it. She had not liked the feel of it on her scalp. She then found the active ingredient in her treatment was available orally, unfortunately this did not work either and it had some rather unpleasant side effects.
After discussion with a friend, Pauline called Ashley and Martin to discuss what else could be done to help her. It had been several years of wanting to find an effective treatment for her hair. The 65-year-old held out hope that Ashley and Martin would finally provide the solution.

Before performing a scalp examination, the consultant discussed any factors that may be affecting the quality of Pauline’s hair with her. In addition to the thyroid issues Pauline was experiencing, her stress levels were elevated due to family health problems and her mother provided a genetic link to female pattern hair loss.

The consultant saw several ways forward for Pauline, each effective within a different time frame. After listening to her options, Pauline opted for a home based laser therapy treatment. It may take longer, but it was completely natural and avoided the need to treat her scalp with any topical solutions. She knew that Ashley and Martin had a good name, so she still felt confident choosing a therapy that did not include medical intervention. Her dermatologist, a friend, had attended her appointment with her. Pauline signed up for treatment feeling assured to have several professionals, including the clinic doctor, accessible throughout her treatment.

With treatment performed at home, it was six months before Pauline returned to the clinic for a review appointment. And when she did, she was very happy with the progress the first few months of her treatment had produced. Her hair loss had reduced to a natural rate and the quality and health of her hair had improved no end. She was now able to style her hair to cover any areas of concern and her confidence in continued regrowth had only grown. 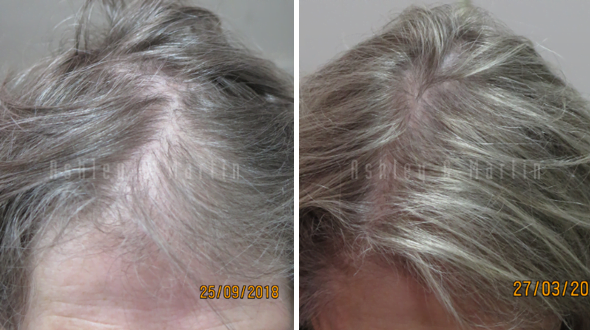