Twenty-seven year old Aarushi was struggling with Telogen Effluvium for four months. She was underweight, not sleeping well, skipping meals and suffering from anaemia. Her worries about the effect her hair loss was having on her appearance only compounded the stress she was experiencing having started a new job that involved shift work. She had tried treating her thinning hair with over the counter remedies, but nothing had helped and it only continued to thin.

For the past month, the idea of seeking professional help for her problem had been playing on her mind. After a simple Google search she found the answers she was looking for and contacted Ashley and Martin online. The bride-to-be only had six months left before her wedding to fix her situation.

Speaking to her Ashley and Martin consultant, she confided the stresses she had been under the last six months and the negative effect the shift work was having on her eating and sleeping patterns. With no family history of hair loss, her consultant knew that this temporary hair loss condition could be turned around quickly with regular laser therapy and medication. With her cousin alongside her for moral support, Aarushi signed up for treatment immediately.

Aarushi took her medication faithfully and attended the Ashley and Martin offices regularly to have her laser therapy treatments. Before long, Aarushi and her cousin began to see improvements.

Along with her hair, Aarushi’s confidence in herself improved. She no longer felt depressed about her hair, had a more positive outlook on life and was not focussed on her hair fall.

Aarushi was able to finish planning her wedding with the knowledge that she had acted in time to save her hair. Her wedding photos would be everything she had dreamed of. 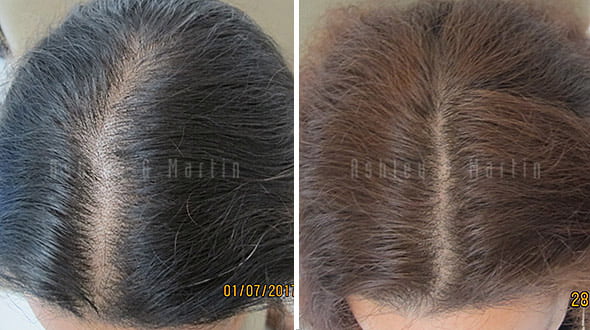